Practical details on the workings of the Bisq DAO for traders and contributors.

Immense technical challenges aside, the practical constraints of the Bisq DAO are not trivial. One requirement is true, complete decentralization of decision-making (no persons with special powers) and funding (no central wallets or accounts to store and distribute funds). Another is that incentives must be so well-aligned that stakeholders are naturally motivated to grow and support the DAO merely by acting rationally—there are no managers to promote you (or fire you).

And perhaps most critically, the DAO needs to be secure: safe from hackers and scammers trying to take advantage of the DAO and its users.

Contributors earn BSQ for working on Bisq, and traders spend BSQ to trade on Bisq. We’ve covered this basic dynamic in this doc and this video series.

But what actually is BSQ, and where does it come from?

A single BSQ token is denominated as 100 satoshis (i.e., it’s represented on the Bitcoin blockchain as 0.00000100 BTC). This bitcoin is 'colored' with additional properties that causes Bisq software to recognize it as BSQ.

BSQ can only be created in one of two ways:

While BSQ is just bitcoin, it should only be stored in a Bisq wallet.

BSQ is stored in a Bitcoin wallet, but the Bisq software takes several measures to keep BSQ and BTC separate to prevent mixing the two by accident. On disk, BTC and BSQ wallets are stored in separate files. In the Bisq interface, BSQ wallets are prefixed with a 'B' to prevent users from mistakenly using BSQ as BTC.

As an additional protection measure, Bisq wallets use a special BIP44 derivation path that other wallets won’t understand.

For user convenience, the built-in Bisq wallets for BTC and BSQ share the same seed.

More details are in the technical overview.

As you may have noticed, the Bisq DAO did not launch with a supply of zero BSQ tokens. So where did the initial supply of BSQ tokens come from?

In short, the initial supply of BSQ tokens was created to account for all the contributions to the Bisq project before the mainnet launch of the Bisq DAO.

These contributions can be divided into 2 segments.

The genesis BSQ distribution was the sum of both segments of past contributions.

Ultimately, the genesis transaction issued 3,657,480 BSQ to over 200 past contributors. You can see the corresponding Bitcoin transaction here.

Addresses were confirmed over email, Slack, Twitter, and on these two GitHub threads: one, two.

There are 2 key points to note about how the Bisq DAO works. 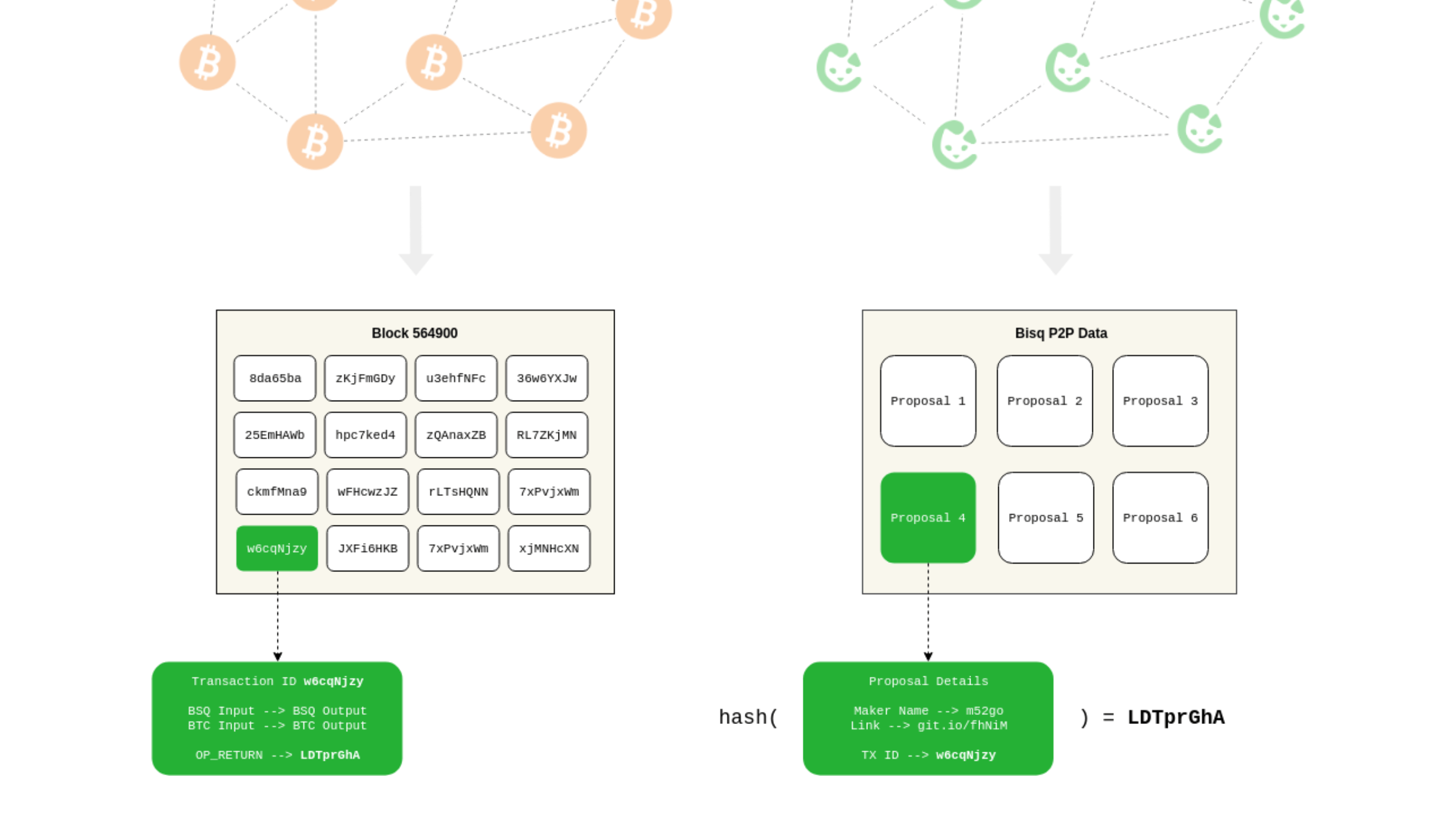 Storing a hash of the extra data on the Bitcoin blockchain ensures any attempts to manipulate it will fail, since the hash of the manipulated data will change and then not match the hash recorded in the corresponding Bitcoin transaction.

Voting cycles are timed to last about 1 month. Duration is measured in blocks, so actual times may vary.

During this time, Bisq stakeholders (contributors and traders) can make proposals. It is not possible to edit a proposal, but it is possible to remove a proposal and submit a corrected one (only during this phase).

There is a small fee to make proposals to discourage spam. Fees for proposals that are removed are not reimbursed.

Proposals requesting the issuance of new BSQ will also require a small amount of BTC to be included in the proposal transaction so there is BTC to 'color' into BSQ. The spec requires 100 satoshis per BSQ token, so a request for 1000 BSQ will require 1000 × 100 = 100,000 satoshis.

For compensation requests, please make sure you follow established conventions and recommendations.

After the proposal phase is over, there is a break of 150 blocks (about 1 day) to review and discuss proposals before voting begins.

You may approve, reject, or abstain from casting a vote on proposals. It is highly recommended that you only approve or reject proposals for which you can make a well-informed decision.

It is not necessary to have made a proposal to be able to vote—any stakeholder (anyone with BSQ) can participate in voting.

Once you have made your selections, you must specify a stake and publish your votes.

Votes cannot be changed once they are published.

Your voting weight is determined by 2 factors: reputation (how much BSQ you’ve earned), and stake (how much of your owned BSQ you allot to your vote) that you specify in your vote transaction.

Reputation cannot be specified when making a vote transaction—it’s automatically calculated for the user from their past contributions.

Stake is the literal amount of BSQ specified for the vote transaction. This is BSQ you own that you would like to devote to your vote. The more BSQ you allot, the more weight your vote will hold. BSQ specified for stake is unspendable for the duration of the voting cycle.

Total voting weight is the sum of reputation value and specified stake.

BSQ earned is worth more than BSQ bought. The idea is that there is no better measure of good-will and dedication to the project than actually working on the project. The arrangement still allows people who buy into the project considerable influence, while hopefully minimizing the potential of whales with bad intentions from buying their way in and sabotaging the project.

Following the end of the blind voting phase, there is a break of 10 blocks to protect against reorgs.

You will see a pop-up in the UI when the transaction has been published.

Only a Bitcoin transaction is made in this phase—no additional data is broadcast to the Bisq P2P network.

If a user fails to make their vote reveal transaction, their vote is rendered invalid.

Again, for protection against reorgs, there is a break of 10 blocks after this phase is over.

This phase is more of a trigger, so allotting 10 blocks is more for consistency than a hard requirement.

In this phase, Bisq nodes calculate vote results from proposals, voting stake, and votes (which can now be decrypted from the vote reveal transactions).

So, when calculating vote results, the majority hash from the vote reveal transactions (majority by voting stake) is considered to be the authoritative representation of votes for the whole network. Vote result calculations are based on this uniform determination, ensuring consensus across the network.

Great care has been taken to make sure that there are no opportunities for the Bisq DAO to be exploited by scammers, hackers, or others with bad intentions.

Much expertise and theory went into the Bisq DAO’s conception, implementation was careful, and testing was thorough. The resulting software is the best expression of the intention of these collective efforts, but it may not be infallible.

We say this to establish that Bisq DAO code is not law. It has clear intentions, and every effort will be made to fix unintended results.

While we hope nothing will be catastrophic enough to require it, hard forks, confiscation, and new issuances are options to deal with extreme scenarios. BSQ trading and DAO operations can be halted through an alert message from the lead developer. Such messages may be ignored by users if they think the measure is being abused, but ignoring such messages in a situation where the measure is justified may exclude the user from reimbursement in case of losses.

Find a typo or have other suggestions for improvement? Please edit this doc or report an issue.