This guide will show you how to use the Bisq DAO’s governance mechanism by walking you through the process of making a proposal and voting.

Voting is a crucial duty in the Bisq DAO that makes decision-making for the Bisq project accessible to all who use it—users and contributors alike. You’ll see how to make a proposal, vote on other proposals, and how the BSQ token enables the process to be handled in a decentralized and trustless but meritocratic way.

BSQ is the unit of value that powers the Bisq DAO. You’ll need a little bit of it to make a proposal and vote.

As of this writing, it costs 2 BSQ to make a proposal and 2 BSQ to cast a vote, but these fees are DAO parameters themselves that can be changed through DAO voting.

One way to acquire BSQ is by contributing to the project. Otherwise, you can buy BSQ on the market just like you would buy any other altcoin on Bisq. 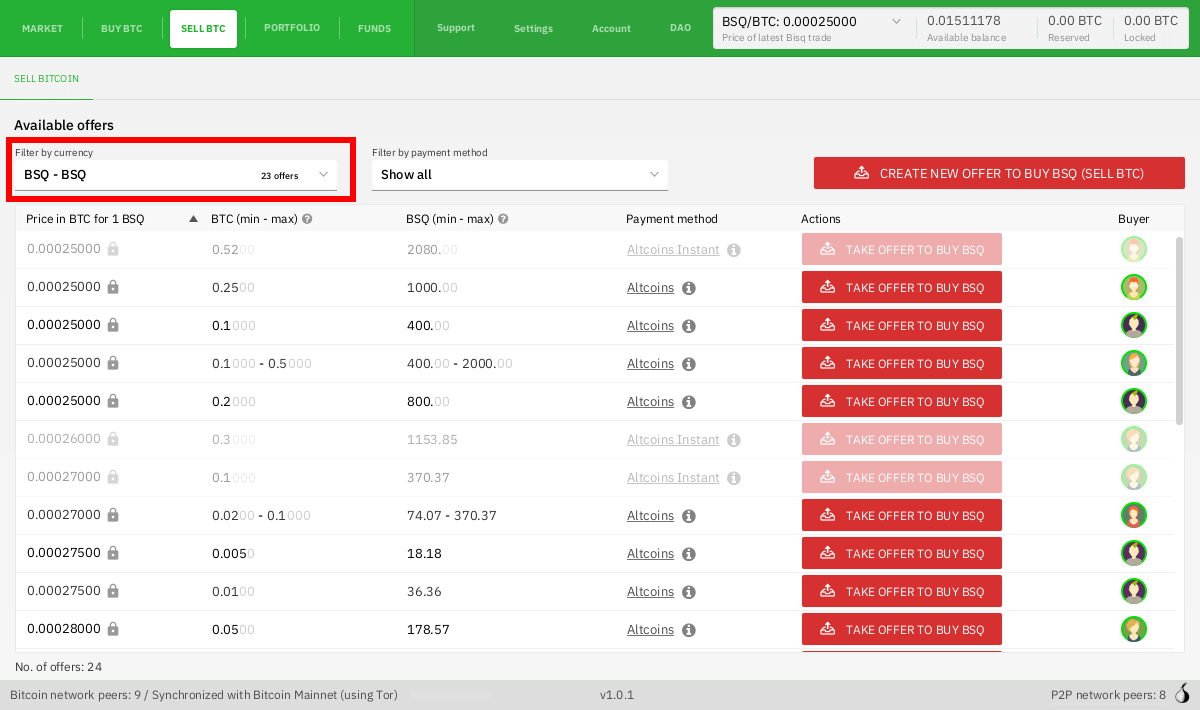 You’ll only need 2 BSQ to make a proposal, but if you want to vote as well, you’ll need at least 10 BSQ to get started.

In either case, you’ll also need a little bit of bitcoin in your Bisq wallet to pay for fees associated with the proposal and voting transactions (0.005 BTC should be more than sufficient).

Participate in a voting cycle

As we cover in our Introduction to the Bisq DAO doc, the BSQ token has several functions within Bisq.

Here, we will focus on governance: making proposals and voting on proposals to adjust various aspects of Bisq.

We’ll do this by participating in one voting cycle in the Bisq DAO. Voting cycles are composed of 4 phases and last for 4,680 blocks (about 1 month on average).

Here are the 4 phases:

You can see approximate start and end dates for the current voting cycle on the Dashboard section of the Governance tab on the DAO screen. 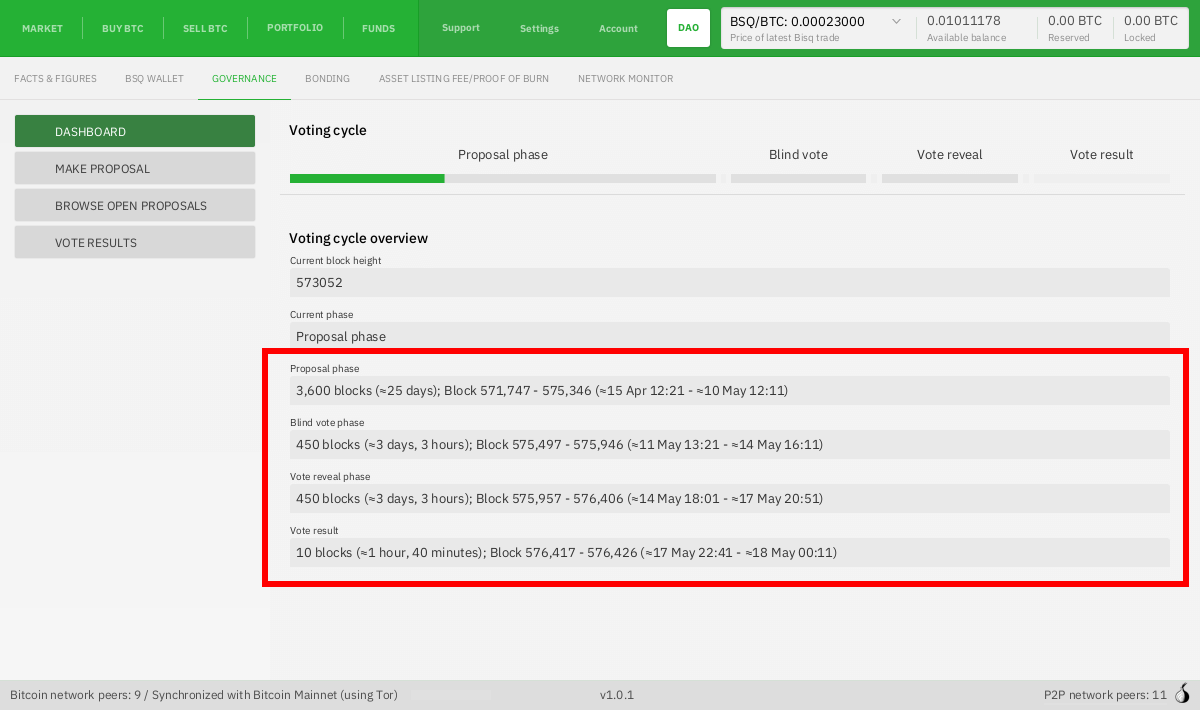 Let’s begin by making a proposal.

In the Make proposal section of the Governance tab of the DAO screen, you’ll find the form to make a new proposal. Pick the type of proposal you want to make from the dropdown, fill the form, and hit Make proposal. 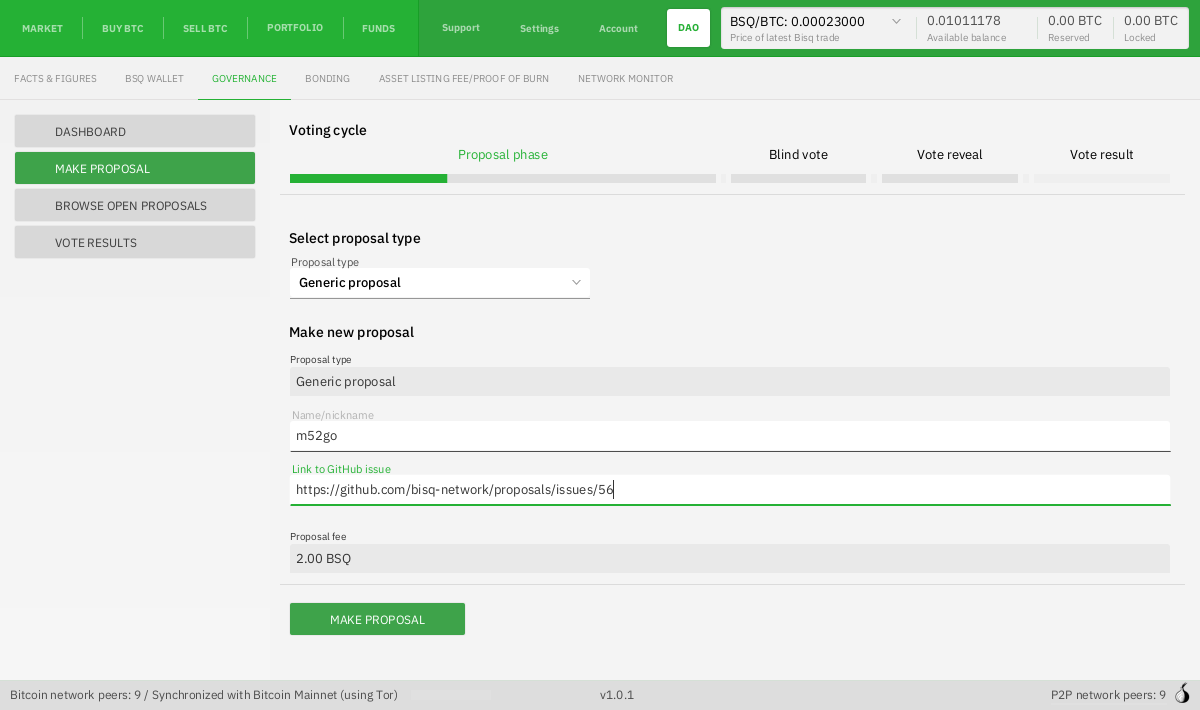 If you made a contribution to Bisq, you’ll make your request for compensation in the form of a proposal—the proposal type will be Compensation request. See guidelines for those requests here.

When you’re done, you can sit back and relax until voting starts.

2a. Vote on proposals 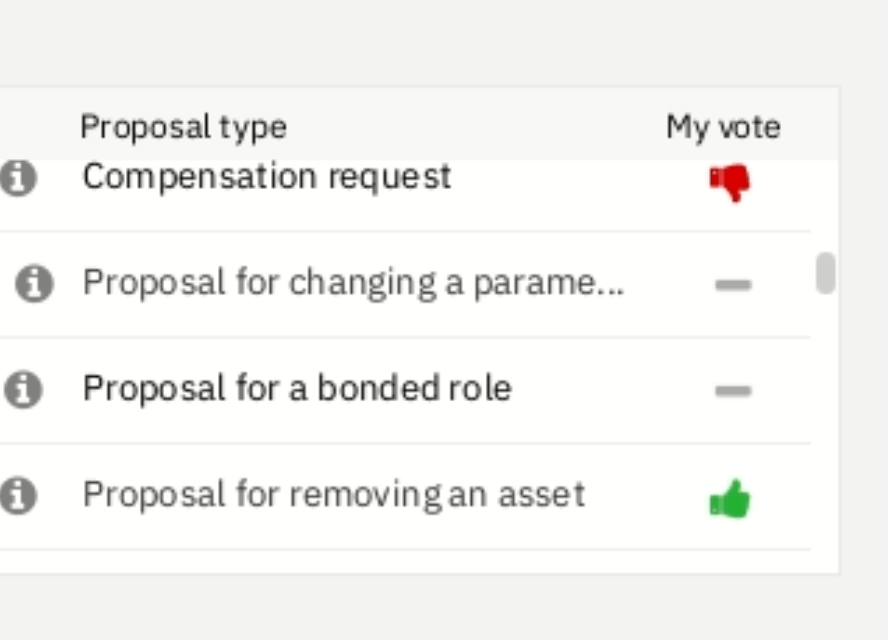 Once the period to make proposals is over, it’s time to vote.

You can see all proposals in the current voting cycle in the Browse open proposals section of the Governance tab on the DAO screen.

Click through each proposal to see more details, and then vote—it’s strongly recommended that you only accept or reject proposals you know well and have a strong opinion about.

When you’re done selecting your votes, don’t forget to actually submit your votes! It can be easy to miss this. 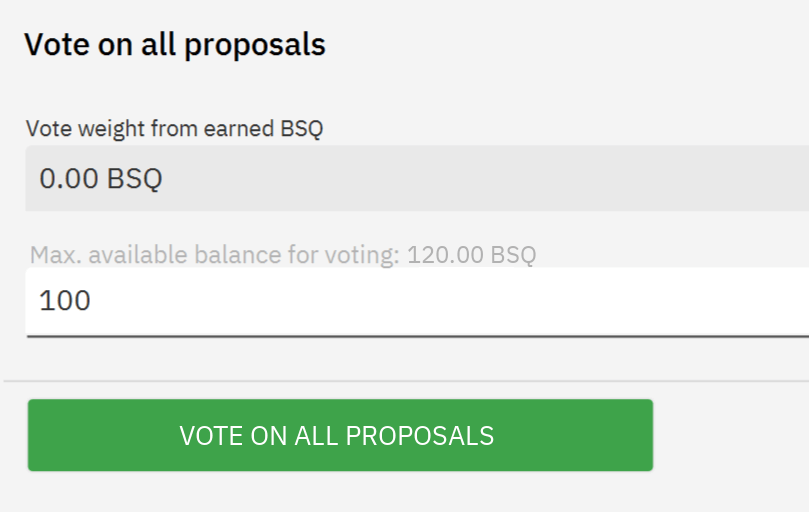 To submit your votes, you need to specify a BSQ amount to use for voting stake. The more BSQ you stake for your vote, the more weight it will carry. This BSQ cannot be traded or otherwise transferred until your vote reveal transaction is published.

The software has checks to prevent such BSQ from being spent, but if BSQ staked for voting is somehow spent, the corresponding vote will be rendered invalid.

This is why, as you see in the screenshot to the left, we use most (but not all) of our BSQ for the voting stake—we left some BSQ available for spending in case we need it for other purposes during the remainder of the voting cycle.

Vote weight from earned BSQ is BSQ earned from contributing to Bisq: this BSQ is treated slightly differently from BSQ bought on the open market when determining a stakeholder’s voting weight.

Once you’ve entered a voting stake, go ahead and click the Vote on all proposals button at the bottom of the screen.

After the blind voting phase is over, you must make sure Bisq goes back online at some point during the vote reveal phase to publish your vote reveal transaction.

This transaction includes the key to decrypt your vote from the blind voting phase. It also includes a representation of all votes you’ve received from the network, which is used to determine a consensus of all votes cast on the network. See more details here.

Don’t forget this step! If your vote reveal transaction is not published, your vote cannot be decrypted, and so it cannot be counted.

Once the vote reveal phase is over, results are calculated and the next voting cycle starts.

You can see results of the last voting cycle in the Vote results section of the Governance tab of the DAO screen. 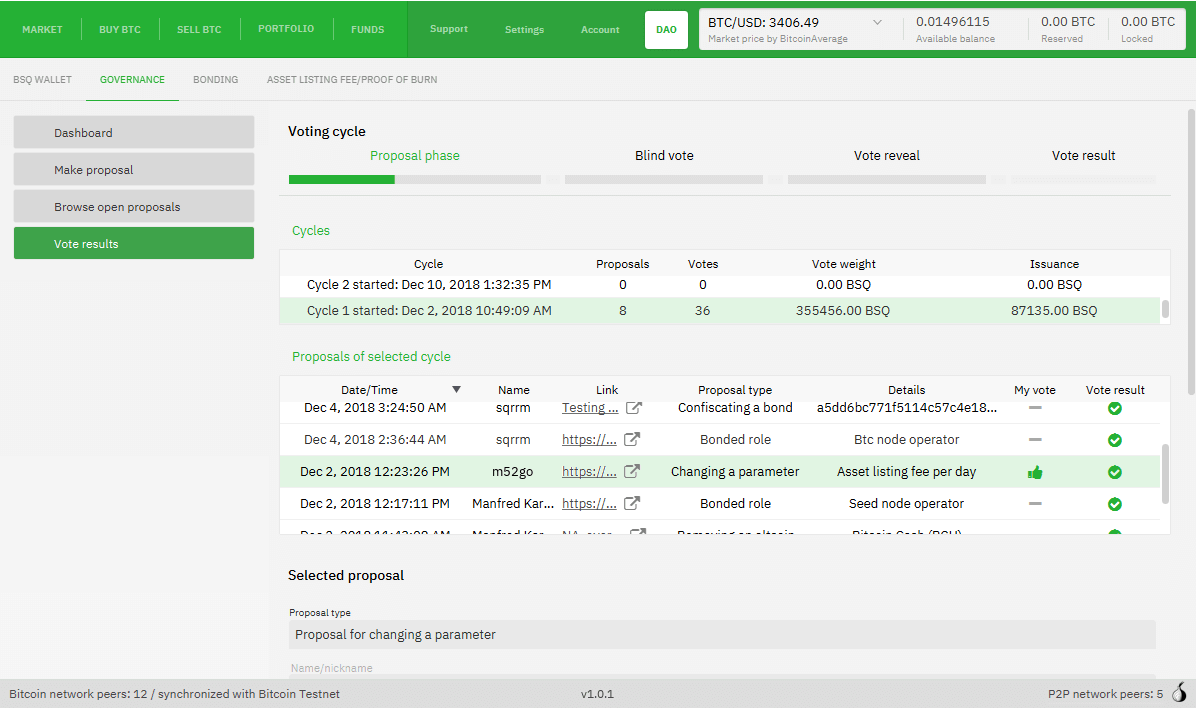 If your proposal was a compensation request, this is when the BTC you included in your request will show as BSQ (after having been 'colored' by the voting process). Check your BSQ wallet balance in the BSQ Wallet tab of the DAO screen to see the updated balance.

That’s it—you’ve now participated in a full voting cycle of the Bisq DAO, the decentralized governance mechanism for the Bisq exchange.

So there’s a BSQ block explorer. Whenever you do a BSQ transaction, you can see it there.

Here’s a screenshot of the past few BSQ transactions as of the end of April 2019, just a few days after the BSQ genesis transaction.

You’ll notice that this block explorer recognizes the various transaction properties that make valid BSQ transactions, and it labels them accordingly.

Here’s a snapshot of the latest transactions on the BSQ explorer during a voting phase: 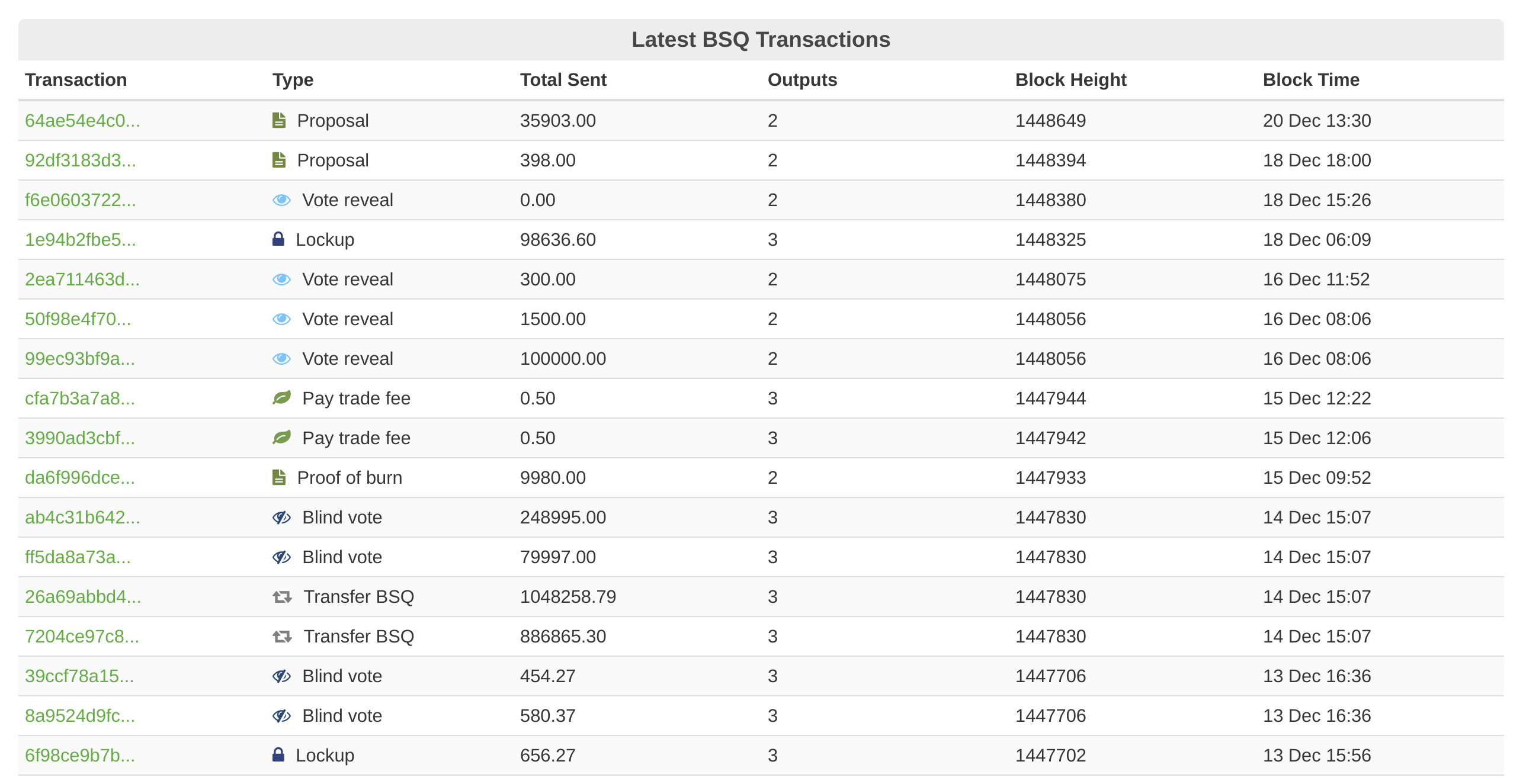 Some BSQ transactions on the BSQ block explorer.

Typically, most transactions will be for transfers and paying trade fees—governance-related BSQ transactions for voting and vote reveals will only occur during the times of their respective phases. Proposals can be made at any time during the proposal phase, but tend to be made toward the end of the phase.

We covered the Bisq DAO here in a very practical way: just the steps you need to follow to make a proposal and vote.

To keep this guide as simple as possible, we left out most details of what’s happening under the hood. For those details, you might be interested in checking out our User Reference and Technical Overview.

For more conceptual details, be sure to check out our Introduction to the Bisq DAO doc and Bisq DAO in Brief video series.

Get help and stay in touch

If you get stuck, reach out! There’s a community of people to help you on Keybase, the Bisq forum, and the /r/bisq subreddit.

And if you really like Bisq, consider contributing! Even if you’re not a developer, there’s much you can do.

Find a typo or have other suggestions for improvement? Please edit this doc or report an issue.